Coaltown and the mining towns are west of the Dark Woods, and Bridgetown is east of the woods in the area where the river splits and creates the three portions of Bridgetown (Westtown, Centertown and Easttown). 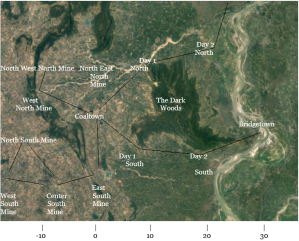 The mining towns are connected by trails.

This is roughly the world as you know it. The center is all farmland, to the east it gives way to swampy, hilly forests that eventually rise to mountains and at the top of the mountains, extending forever to the east, is the Starshower Barrens. Rivers descend from the mountains, making the forests very soggy where they meet the farms, but providing excellent water as they wend through the fields. There is a also a Great River that runs from the north; beyond the farmlands to the north is just wild prairie, extending forever northward, where ample game animals life. West of the Great River is more prairie, except west of the spotty wooded areas (and the Dark Wood)–that’s where the coal mines are. The farthest west mines are depleted and abandoned. Your elder’s grandparents told tales of ancient times when people traveled all the way west to an ocean, which is apparently water that extends forever to the west. No one you know has ever traveled more than a couple of days west of the active mining towns.